Situated along the south-eastern tip of the Arabian Peninsula, the United Arab Emirates (UAE) has a coastline that straddles the Gulf of Oman and the Arabian Gulf. The Gulf region constitutes an enclosed body of shallow water with an average depth of 35m, connected to the Indian Ocean only through the narrow Strait of Hormuz. The southern Gulf is characterized by different habitats including extensive seagrass meadows, mangroves, areas of sandy and soft sediments, coral reefs, and numerous manmade and natural channel systems.

The southern Gulf is one of the most fragile and vulnerable marine ecosystems in the world. Over the last 30 years, the region has experienced drastic anthropogenic impacts, such as land reclamation, overfishing and human population expansion related effects.

The UAE is a signatory to the CMS Dugong MoU, which promotes internationally coordinated actions aimed at ensuring the long-term survival of dugongs and their seagrass habitats throughout their extensive range. In 2009, CMS and Environment Agency – Abu Dhabi (EAD) signed a partnership agreement establishing a CMS Office in Abu Dhabi, which hosts the CMS Dugong MOU Secretariat and the CMS Raptors MOU Secretariat. 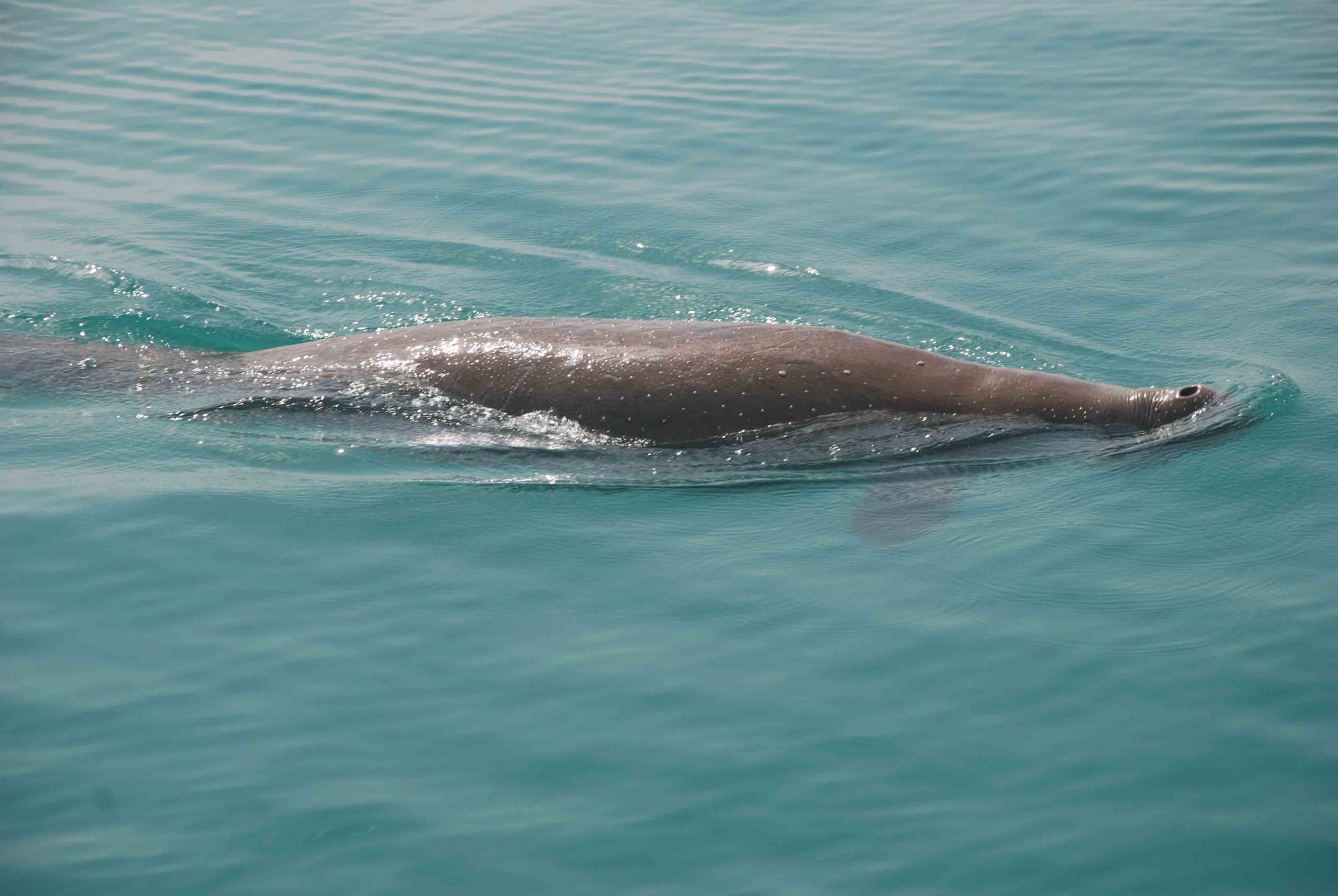 Seagrass habitats constitute a critical marine resource in the region, sustaining a high primary production, harbouring a high biodiversity of associated plant and animal species, and serving as important nursery grounds. Approximately 7,000 km2 of seagrass habitat has been mapped in the Arabian Gulf to date, with particularly extensive meadows in the coastal waters of the UAE, Bahrain and Qatar.

The Arabian Gulf is a challenging environment for seagrass growth, characterized by large seasonal temperature variations, fluctuating nutrient levels and high salinities. These extreme environmental conditions are tolerated by only three seagrass species in the UAE: Halodule uninervis, the dominant species with more that 60% cover, Halophila stipulacea and Halophila ovalis.

The dugong population in the Arabian Gulf is believed to be the second largest in the world after Australia, with aerial surveys estimating a population of 3,000 dugongs, predominately found in the Central and Western regions of Abu Dhabi. The UNESCO Marawah Marine Biosphere Reserve supports the highest density of dugongs in the area, followed by Al-Yasat Marine Protected Area.

Dugongs are usually sighted in small groups or as solitary individuals in UAE waters, however aggregations of up to 300 individuals have been observed in both winter and summer seasons. The reason behind these large groups is not clear, however nursing of young animals, rough-sea conditions, breeding and calving are thought to be possible factors.

The Environment Agency Abu Dhabi has a long-term research and conservation plan that includes regular aerial surveys of the species, investigation of mortality, satellite telemetry to study migration and study of genetics. This research has found that almost all reported dugong deaths are caused by gill net fishing and around 15 stranded dead dugongs are found every year along the UAE coast.

Dugong remains dating to around 6,000 years ago were discovered on Akab Island, in Umm al Qaywayn. These fossils suggest that hunting was seasonal and focused on young individuals. Archaeological information found at Umm an-Nar, near Abu Dhabi also implies that dugongs were a staple part of the local diet 4,000 years ago.

Traditionally dugongs were utilized throughout the UAE; the meat and bone marrow were eaten, the hide used to make sandals, and tusks used to fashion the handles for Sheikh’s swords. Dugongs were captured by large groups of people herding them into shallow water and clubbing them to death. This active hunting method was banned approximately 30 years ago and currently no hunting of dugongs is permitted in UAE waters. 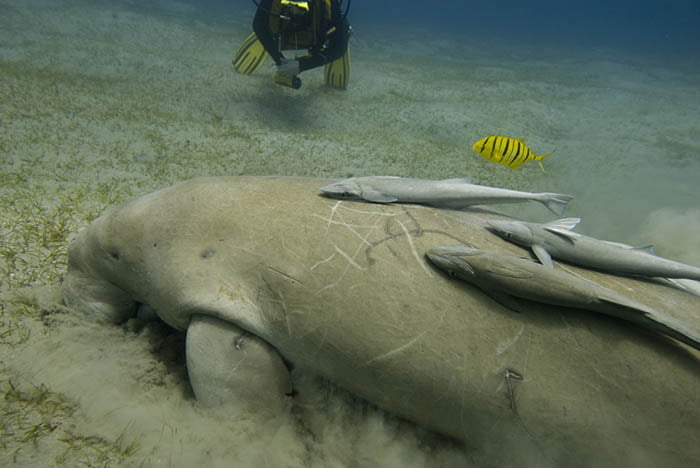 One of the major threats to the marine environment of the UAE is the pollution resulting from the oil and gas industry. In addition, the counterclockwise current in the Gulf means that water from the north-western section, where most of the oil extraction occurs, is likely to flow to the south-eastern section where the most important dugong habitat occurs.

Land reclamation threatens the marine environment of the Arabian Gulf by destroying and replacing intertidal and sub-tidal habitats, including seagrass meadows. Reclamation is coupled with dredging and the dumping of dredged spoil, which involves either direct excavation of seagrass or its smothering, which limits its growth and survival by increasing turbidity. Reclamation projects also threaten to increase the salinity levels by impeding water flow into and out of the area.

The Arabian Gulf also receives other pollutants as a result of rapid industrial development in the region. The shallow water depth (maximum 35m) and long flushing time (five years) of the Gulf, means that there is limited capacity for these pollutants to be absorbed and diluted.

Land reclamation is believed to be one the greatest threats to the marine environment of the Arabian Gulf - destroying and replacing intertidal and sub-tidal habitats, including seagrass communities.

Dugongs in UAE waters are protected by Federal Law No. 23 (1999) for Protection of the Marine Environment, Article 28/2000 of the Amiri Decree, which prohibits the exploitation of dugongs in the UAE, and by Federal Law No. (24) of 1999 for the Protection and Development of the Environment. In addition, a recent ban on drift net fishing in the UAE waters should minimize dugong mortalities in fishing nets.

According to the Environmental Performance Index, the number of nature reserves in the country has increased in recent years from 19 in 2010 to 43 in 2017. This includes 17 marine protected areas and one UNESCO-MAB marine managed area (the Marawah Marine Biosphere Reserve, the regions first and largest marine protected biosphere).

According to the Environmental Performance Index, the number of nature reserves in the UAE increased from 19 to 43 between 2010- 2017.

Beech. M.J. (2010). Mermaids of The Arabian Gulf: Archaeological Evidence for the Exploitation of Dugongs from Prehistory to the Present.  Liwa (Journal of the National Center for Documentation & Research). Volume 2 , No.3.

Burt, J.A. (2014). The environmental costs of coastal urbanization in the Arabian Gulf. City. 18.

Preen,A. (2004). Distribution, abundance and conservation status of dugongs and dolphins in the southern and western Arabian Gulf. Biological Conservation, 118(2), p.205-218. 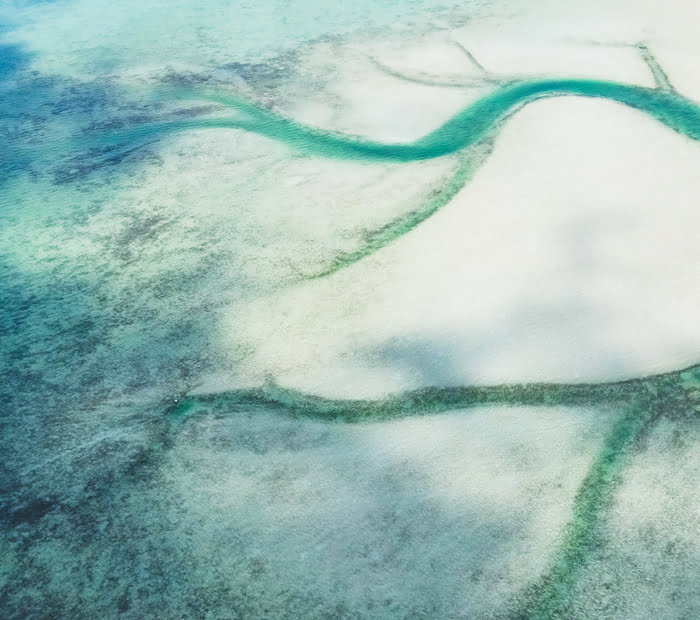