With a coastline 2,770 km long, Mozambique has a wide diversity of marine and coastal habitats, which support pristine ecosystems, high biodiversity and an array of flagship species. Several ecological areas of regional and global importance (hotspots) have been identified along the coast. Almost 900 species of reef-associated fish have been recorded, as well as 122 species of sharks and rays, 400 species of molluscs, 27 species of marine mammals – including the last viable population of dugongs in the western Indian Ocean – five species of marine turtles, 270 species of hard and soft corals, 14 species of seagrasses and ten species of mangroves.

There are more than 20 million people living in Mozambique, over two-thirds of whom reside within the coastal region.  The natural resources within the coastal zone sustain 60% of the population, and help support the country’s economy through fisheries, tourism and industries. Approximately 40% of the export income for the country come from fisheries; these activities put a significant strain on coastal resources and marine environments, including seagrass ecosystems. 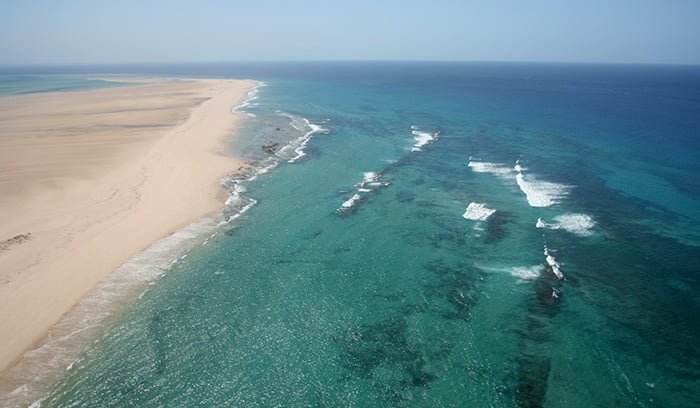 Thirteen species of seagrass have been recorded in Mozambique, including the recently discovered Thalassodendron leptocaulis, which only occurs in rocky habitats of Mozambique and South Africa.

Seagrass meadows in Mozambique cover an area of 439 km2, and generally occur in the intertidal zone. The most important sites for the conservation of this ecosystem and associated species are the Quirimbas Archipelago, Bay Fernão-Veloso, the Bazaruto Archipelago, and the island of Inhaca and Ponta do Ouro. 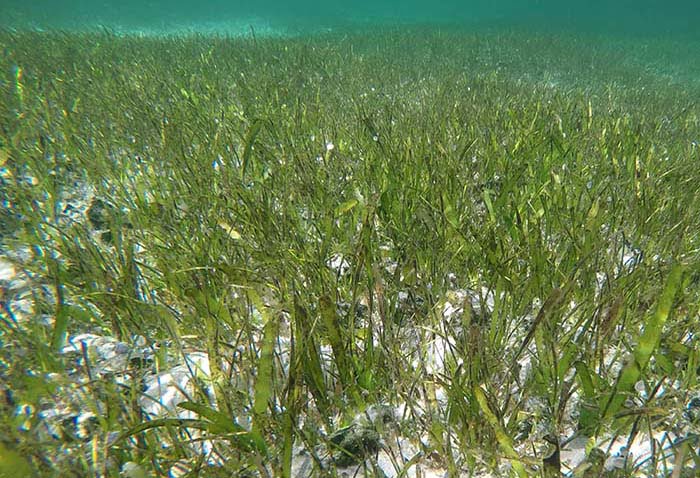 Historical information suggests that dugongs were once plentiful and widely distributed along the Mozambique coast. Today the largest and last viable population of dugongs in the western Indian Ocean are found in the Bazaruto Archipelago region. With other populations in the region close to extirpation, the Mozambiquan population, estimated at 250-350 individuals, represents the species’ last stronghold in East Africa. Estimates suggest that this population can sustain only a maximum of two human-caused deaths of productive females per year before their viability is threatened.

The importance of the Bazaruto Archipelago for dugong conservation is highlighted by the declaration of the Bazaruto Archipelago Important Marine Mammal Area (IMMA), which, at 16,280 km2 in size, also features habitat for endangered Indian Ocean humpback dolphins and ten other whale and dolphin species, including breeding grounds of humpback whales.

Dugongs have traditionally been sold and eaten in Mozambique, and hunting of dugongs was common until the late 1990s.  Due to their protected status, fishers no longer openly admit to catching dugongs; however, their meat is still prized and reportedly still illegally sold in restaurants, disguised as pork. 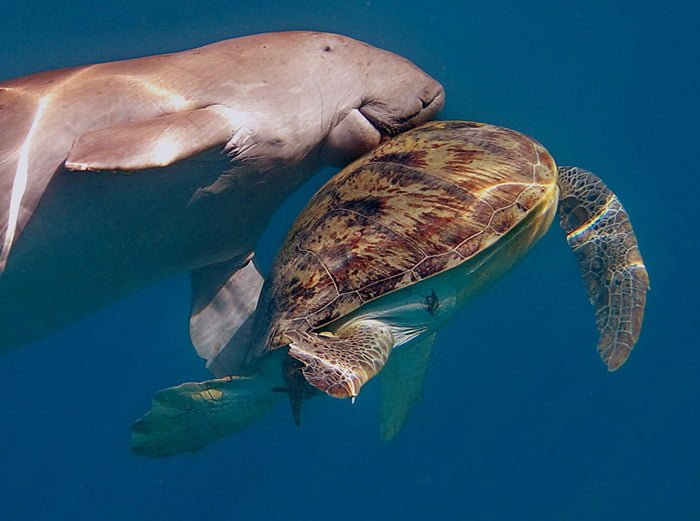 Major threats to the coastal and marine ecosystems of Mozambique include overfishing, industrial and coastal development, natural resources exploitation, unregulated and damaging tourism practices, pollution and weather extremes such and storms and cyclones.

The dugong population in Bazaruto is protected by two marine protected areas (MPAs) – the Bazaruto Archipelago National Park and the Vilanculos Wildlife Sanctuary – however more than 80% of the known dugong population are found outside the boundaries of these MPAs, in remote areas that are not surveilled by local authorities. It is here that dugongs face the threats of bycatch, poaching, and acoustic and boat traffic disturbance from coastal development, as well as proposed extractive gas and oil seismic exploration.

In the Bazaruto Archipelago, the greatest threat to adult dugongs is the commercial fishery for shark fins. This fishery uses 40 cm stretch size gillnets set for extended periods and left unattended overnight in known dugong habitats, resulting in high dugong mortality. Reports also suggests that in Bazaruto Bay, dugong hunting has developed into a directed fishery. The extent of the fishery remains unknown but is estimated to be between 4-6 individuals per year.

The seagrass meadows are threatened by pollution, as well as siltation and sedimentation caused by river erosion. 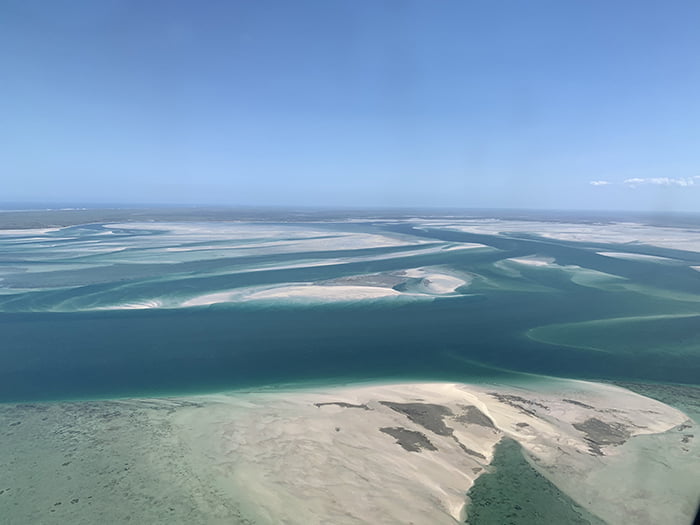 Mozambique has a comprehensive environmental and fisheries legal framework, as well as being a signatory to several conventions and international agreements. The legal framework is recognized as sufficient and progressive, although facing challenges with enforcement and compliance.

Dugongs and seagrass are protected under several legal instruments in Mozambique, including the Conservation Law 2014 (revised in 2017); Law of fisheries 2013; General Regulation on Maritime Fishery Activities (Decree 43/2003); The Forestry and Wildlife Act 1999; (Law No.10/99), Environmental Law 1999; and Decree No. 45/2006 approving the Regulation for the Prevention of Marine Pollution. In 2015, Mozambique prepared a National Strategy and Action Plan of Biological Diversity (2015-2035).

In December 2019, the International Union for the Conservation of Nature (IUCN) announced 37 new IMMAs in the western Indian Ocean and Arabian Seas, highlighting critical habitat that should be earmarked and managed for conservation. These areas include the 16,280 km2 Bazaruto Archipelago to Inhambane Bay IMMA.

The National Authority for Conservation Areas (ANAC), established in 2011, is a State institution responsible for the conservation of biodiversity and the sustainable development of the country’s ecotourism. Its main activities are the planning, coordination and execution of activities in the conservation areas, in partnership with local organizations and communities. The conservation areas administered by ANAC represent around 25% of the national territory.

The Primeiras and Segundas protected area, established in 2012, is Africa’s largest protected marine zone. Covering more than 17,000 km2, including the ten islands of the archipelago of the same name and the swath of ocean separating them from land, the marine reserve aims to protect the environment and surrounding coral reef system, restoring fisheries, protecting breeding grounds for dugongs and green sea turtles, and creating a better quality of life for the people of the region. 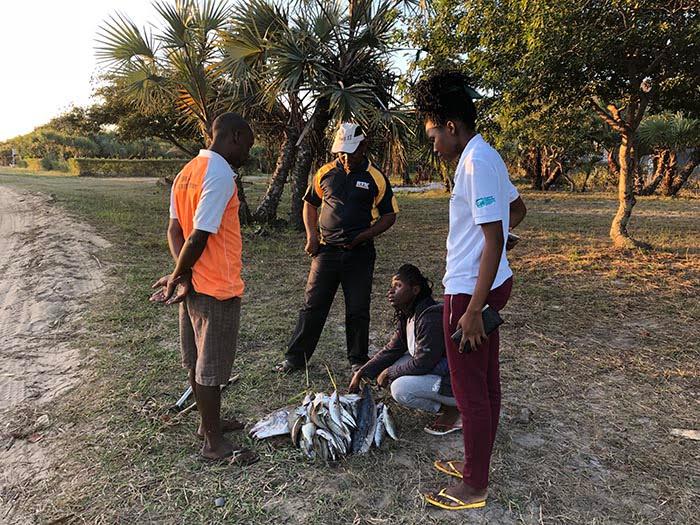 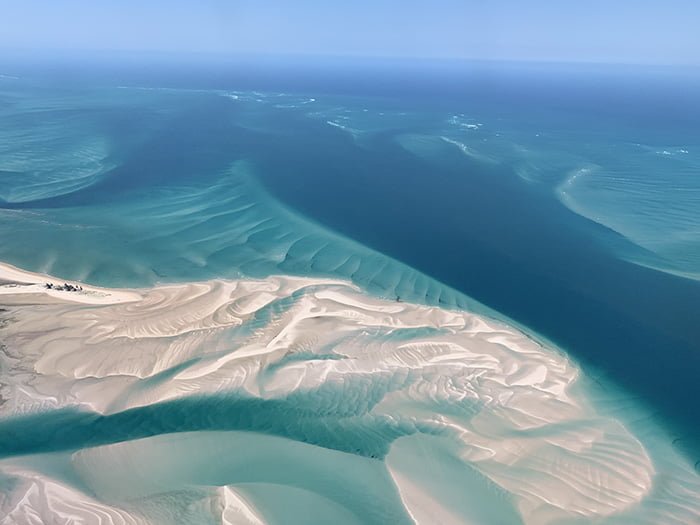